"God's Creation MY INSPIRATION He Put The Art In My Heart"

I WAS ONLY 19YRS OLD & MY LIFE ALMOST ENDED! 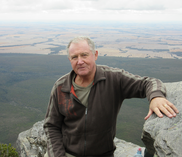 It was Easter 2014 and only a few months before my 70th birthday.  My wife Lyn & I climbed Bluff Knoll.
We had done it twenty years before, but this time it took us twice as long, but we made it.​As I stood on the highest point of the highest hill, ​above everyone standing  on the ground in Western Australia,  my thoughts turned to the lowest parts of the ocean & how I almost drowned and how I very nearly didn't make it this far in life.

I CALLED OUT TO THE GOD I DIDN'T THINK I BELIEVED IN.

On board were Bronze canon, Elephant tusks, thousands of Ballast bricks, Earthenware jugs, Eight chests of silver coins and a crew of 193 (118 drowned).

​ 300 years later as I dived on her treasure, the Gilt Dragon almost claimed my life too!

Mirror calm seas.
It was a beautiful sunny day & the sea was mirror calm.
I had been briefed by Allan Robinson on the three king waves that would come up from time to time & the plan was to keep watching out for them, turn & face them and dive under them before they broke on the reef.


Our party consisted of Allan Robinson, Garry (?) a local young rock lobster fisherman, my girlfriend and me. Garry seemed to be living like a castaway on the beach and I thought to myself "We already have Robinson, so this guy must be Crusoe".

Garry impressed me, he was a larger than life young guy and I envied his lifestyle. On the beach he drove an unlicensed, topless ex-US army jeep with kangaroo skin seat covers. He worked on his Dad's cray fishing boat and he lived alone on the beach at Ledge Point in a corrugated iron shack, among the sand dunes. At the rear of his shack he showed me a large Elephant tusk (Part of the Gilt Dragon's valuable treasure) worm eaten from hundreds of years in the sea.

We were in a small outboard motor boat about 3 and a half miles (in those days considered to be outside of Australian Territorial waters) from shore, at Ledge Point on the 1656 wreck of the Dutch East Indies vessel, the Vergulde Draeck (Gilt Dragon) with its tons of ballast bricks, eight chests of silver coins, elephant tusks, pottery, iron cannons and at least one gleaming bronze cannon, which I saw and touched, yet official WA museum reports say it did not exist.

Canon (not from the Gilt Dragon)
The sea was eerily calm and Allan thought it was safe enough for us to snorkel from his boat to see a cannon that stood vertical from the reef with its muzzle protruding just a fraction out of the water.  I was a skinny kid, my wetsuit jacket was too big for me and I had a borrowed weight belt made of an old ex-army webbing belt with homemade weights bolted onto it.

We got in close to the reef where the water was shallow, Allan pointed to a protrusion just above the mirror calm water that swirled gently around it.

“WOW!” A three hundred year bronze cannon with its muzzle just breaking the surface, pointing skyward from the side of the reef. Polished, literally by the sands of time, it gleamed like gold in the clear water. (It recent years I have come to believe this bronze cannon was a deck cannon, smaller than the iron cannons)

Taking a quick breath I dived down and touched the clear VOC crest on its gleaming sand polished muzzle. I was vaguely aware of Allan shouting something, but I was too overcome with excitement to respond. I came up for a breath of air and realised something was terribly wrong, a huge shadow folded like a giant hand above me and as if the awesome site of the cannon hadn’t been breathtaking enough, the first of an unheard of six king waves tore my mask and snorkel from my face, scooped me up and hurled me onto the jagged rocks, knocking out the remnants of my breath of air and stunning me. I then fell back off the reef and plunged to the bottom where, even without my mask, I could see more cannon lying dark on the white sand. I grabbed hold of one but the next wave was too strong for me, almost ripping my fins from my feet. Again like a giant hand the wave rolled over me and it squeezed me like a tube of toothpaste. I was torn from my anchor point, lost my grip and again hurled savagely, like a rag doll, onto the rocks.

I knew I was in trouble and although I was frightened for my life, I remained relatively calm and thankful to the UEC (Underwater Explorers Club) training and experience. I knew what to do, drop my weight belt and the buoyancy of my wetsuit would work like a life jacket. But I had one big problem; the safety release on the homemade weight belt wouldn’t work. The belt was jammed and with each receding wave, every time I tried to raise my head for a gulp of air, the weights dragged me down to the bottom. One moment I was swirling around on the bottom in the sand amongst the cannon and the next I was on the ragged rocks.

I was totally exhausted, the fight and the breath had been knocked out of me. I gave up, this was the end of my nineteen years on this earth, and I knew I would soon be sucking sea water & sand into my empty lungs. In a surreal, silent, slow motion moment, my whole life, like a movie, replayed in front of my eyes. In the final episode it was as if I saw myself lifeless, dead, bloated and blue slowly drifting backwards and forwards amongst the weed. Suddenly! I burst back to reality “This is not for me!” and my brain screamed out to the God that I didn’t think I believed in “God please save me!”

With that, my whole being seemed to explode with a super charge of Adrenaline, enabling me to throw myself to the surface.

Oblivious to my drama, Allan had made it to safety. I caught a glimpse of him in the water near the boat & on board was Garry & my girlfriend. When I saw her I thought “This is the last time I will ever see you”. 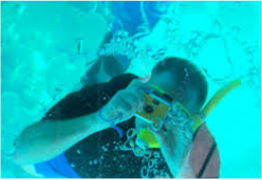 Photo by Lyn Woodmore - Rex underwater.
I was still in trouble with the belt dragging me down. There was just enough time, before the final wave broke, for me to yell out to Allan for help. Strangely it had seemed so natural and so easy to shout out to God for help, yet I found it unnatural and embarrassing to call out to man. I quickly overcame my embarrassment and was able to get out two or three shouts for “HELP!” before the next wave grabbed me. Strangely this wave behaved differently to the preceding five. It still effortlessly scooped me up, but it didn’t smash me onto the reef, instead it gently rolled me, like a bag of bones, over the full width of the reef and into deeper but calmer waters. There was no way I would be able to swim back to the boat with the weights dragging me down, so while blocking out stories of sharks waiting on this side of the reef for an easy feed of stunned and injured fish, I renewed my effort to drop the belt. Quickly Allan Robinson was alongside me, he always carried a spear with him on this side of the reef to fend off the sharks that I was trying to not think about. He seemed perplexed as to why I had not dropped my belt. He grabbed at the buckle and gave it a wrench. Nothing happened. His expression and manner changed. Reaching for his knife he dropped his brand new spear and it sank into the depths. Then while he partly lifted me with one hand, with the other he sawed through the tough webbing belt. It was difficult and seemed to take ages. Eventually I was free and bobbed around like a cork in my oversized wet suit. Allan took the lead and we swam quite a long way around the reef and back to the boat. Bruised and extremely tired, the swim back was long and painful, so I used a clumsy combination of overarm, breast stroke and side stroke, then while I was in the middle of a dog paddle, Allan said in an unusual serious tone of voice

“Have a look under you!” then suddenly as if to correct himself he said
‘’Oh! It’s Okay. You can’t see without your mask”
“Why, what is it?” I asked
“Nothing, just part of the wreck” he said unconvincingly.
I didn't think there was any wreckage this far from the reef. We were in open waters and thoughts of sharks crept back into my mind. I brought my legs up and avoided splashing like an injured fish.

TOUCHED BY THE HAND OF GOD 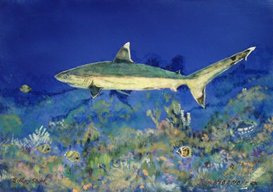 Solitary Shark - Painting by Rex Woodmore
On the way home in the car, Allan admitted that there was no wreck under me, but there was a ten foot (3 meter) Bronze Whaler shark ‘sniffing’ at my scratched and bleeding legs. He was concerned that had I known, I might have exacerbated the severity of the  situation by splashing in panic.

It was a strange journey home and I had mixed emotions. I was confused and yet was sure that something, far more mysterious than possible death, had happened to me. I had called out to the God that I thought I did not believe in.
But who did I thank that day? I thanked the man that cut off my weight belt. And to what did I credit the surge of power that came over me when I needed it most? I credited my own system for its production of Adrenalin.

THE SPIRIT OF GOD 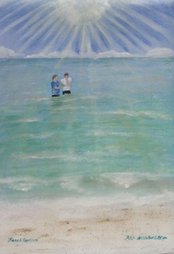 Beach Baptism by Rex Woodmore
Sadly, it took me about three decades and another tragic episode in my life, before  I reflected on my near drowning, my close encounter with an inquisitive shark and how I had called out to the God that I did not think I believed in!
And  I thanked God for the love, grace & undeserved mercy that He showed me that day.
Again he picked me up and made me the new man I am today. I know I am far from perfect, but God has not given up on me. Instead he has blessed me in innumerable ways.

Today now as a Christian, I know first hand, that we all have an inherent knowledge of the one and only true God and in every heart there is a void that can only be filled by the Spirit of God.

​Do you ever feel like you’re drowning? Like there’s an ocean of pain and problems and you can’t breathe? But there is One who saves. Who rescues. Who brings your life out of the deep and into the light. His name is Jesus, and He wants to rescue you.
HEAVEN BOUND?
ART SALES:  http://art-sale.weebly.com EMAIL: art@mail-me.com