WHY  I PAINT TREES

"God's Creation, MY INSPIRATION, HE PUT THE ART IN MY HEART" 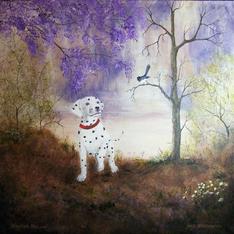 Wagtails Welcome painting by Rex Woodmore Jan 2016
As a child, here in Western Australia, I lived on an orchard in Jarrahdale, with orange, apple, plum, peach, apricot, pear, fig, cherry & quince trees. We were in the midst of the Forest surrounded by towering Jarrah trees with an under-story of Acacia & Banksia trees. Beneath that, with hardly an exotic weed to be seen,  there was a miniature jungle of native flowers, creepers & ferns.
My only playmates were my Dalmatian dogs who, sadly, died  after eating a poisoned (10/80) rabbit. I remember the dogs (Star & her mother Judy the second) sometimes in my paintings. 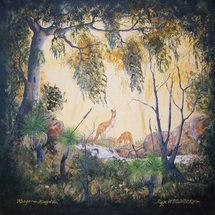 Kangaroo Kingdom by Rex Woodmore
I would spend hours with the dogs exploring the forest and become so thoroughly absorbed in my examination of every fascinating tree, shrub, wild flower, insect, animal & rock  that I would become, what could have been hopelessly lost, had it not been for my dogs. I would say to the dogs ''Home!" and they would amble home with me following. This worked well until the day they took off chasing a kangaroo. Fearful of being left alone,  I desperately chased after them. Fortunately they gave up the chase. Before we resumed our homeward journey, the three of us stood there, panting and slowly, as my heart rate fell, I became aware of my unfamiliar surroundings. I found myself standing in awe of a grove of, perhaps five or six trees, that dwarfed the tallest Jarrah trees. I had never before seen these towering Karri trees with their smooth &  pale greyish bark that contrasted so much with the dark rough bark of the neighbouring Jarrah & Marri trees. I have not seen this grove of trees since that day and yet I often find these ghostly forest  intruders, pale skinned, giant aliens, cropping up in my paintings of my Jarrah forest, the Jarrah forest that only I know. 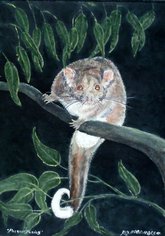 Possum Posing by Rex Woodmore
Apart from the grey kangaroos, the dogs and I saw many creatures that are now rarely seen in the area. Together with introduced foxes, rabbits and even a couple of Brumbies (wild horses), there was the occasional emu, ring tail possum, numbat & Western quoll. The trees were full of birds, wrens, parrots & cockatoos and on the forest floor amongst the bracken fern, delicate white spider orchids, yellow & brown Donkey orchids, bright blue enamel orchids and translucent green & white bird orchids (which I  liked to sketch), there were many species of insect.
The soil was white clay (kaolin) in the banks of the creek and a rich dark brown river loam alongside the creek then an orange gravely mixture (pisolitic bauxite rich laterite) on the higher ground. Under every rock there was a scorpion, a centipede or an occasional snake or legless lizard. 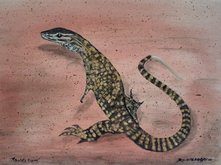 Goulds Goanna by Rex Woodmore
I found the conglomerate rocks themselves interesting too. When I broke open the individual round pebbles, they contained a fine white crystalline powder. My school science teacher had no idea or interest in finding out what it was.
Much later in life I was told by a mineral scientist, my friend Dr.Evan Jamieson, that the white crystals were extremely pure & valuable alumina that is refined into aluminium.
The area eventually became Western Australia’s first bauxite mine (ALCOA Australia) and has earned many millions of dollars for the mining company. http://www.alcoa.com/australia/en/info_page/mining_jarrahdale.asp
At 10 years old, I could have been worth millions of dollars!
(Hindsight is a wonderful thing!)​ 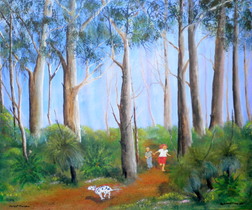 Forest Freedom by Rex Woodmore
Although it has been well re-vegetated by the mining company, the topography, the flora & fauna, has been changed forever. In those early days of re-forestation, the very slow growing Jarrah trees were replaced by faster growing species, many of which are not native to the area or even native to Western Australia and some of the creatures that relied upon the Jarrah trees have gone.

As a working adult much of my employment revolved around trees. I was the seed store manager for  Kimseed, which at the time was the largest supplier of Australian Native seeds in the world. Later  I was a licensed seed collector gathering seeds from the wild for re-vegetation projects.
As a child, I could never have imagined that I would one day be employed to collect and sell native tree and shrub seeds to ALCOA for the re-vegetation of the same forest that I once played in. 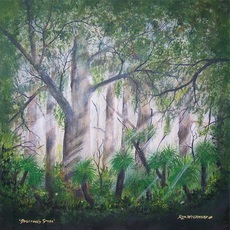 Generously Green by Rex Woodmore
As a licensed seed collector, I collected  literally millions of seeds. I have also  planted thousands of trees on roadsides, reserves, schools, home gardens and various rehabilitation projects.

I was a team leader for the Mandurah Rail Link Grass tree (Xanthorrhoea species) project, removing and transplanting 3,000 grass trees and 1,500 Zamia palms (Macrozamia reidlii). This project resulted in an amazing 90% success rate & made a fortune for the company (GHEMS).

For another Environmental management company (EMS), I propagated & nursed tens of thousands of tree seedlings destined for reforestation and landscaping projects throughout Western Australia and the Eastern States. I have a chainsaw operators certificate, but I must  have grown a 1,000 trees for every tree I felled.

The University of Technology Sydney (UTS) have ten of my
Jacaranda paintings featured in a thesis by Ann-Therese King.
https://opus.lib.uts.edu.au/handle/10453/24072
​

WE REALLY ARE INTO TREES

Back to top of page